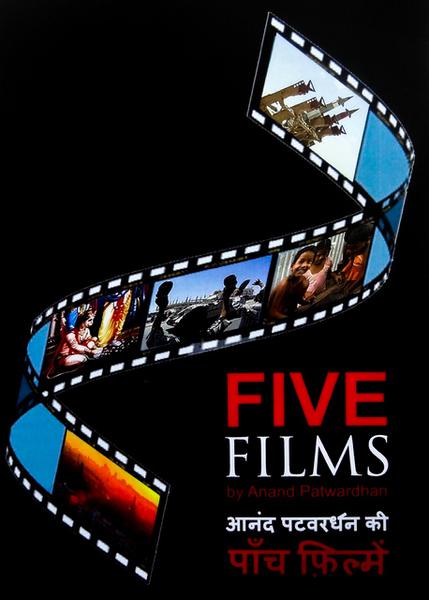 Weight
80.00 gms
Price: ₹ 399.00
1
Add to cart
Buy Now
Sorry! No Stock Available
Add to Wishlist
Questions?
Email a friend
By Anand Patwardhan
Ribbons for Peace
1998, Colour, Music Video, 5 mins
Made in the aftermath of Indian and Pakistani nuclear tests, Ribbons gives new meaning to an old film song by Kishore Kumar – a kind of “Imagine” composed before the days of John Lennon. With guest appearances by well-known movie stars like Naseeruddin Shah, Aamir Khan, Kittu Gidwani and Chandrachur, the film was made to counter a pro-nuke music video made by the political party in power.
We are not your Monkeys
1996, Colour, Music Video, 5 mins
We Are Not Your Monkeys is a music video that reworks the epic Ramayana story to critique the caste and gender oppression implicit in it. Sung by Sambhaji Bhagat and composed by Sambhaji, Anand and the late Daya Pawar, the music video opposes the systematic oppression and negation of basic human rights in the name of religion and mythology.
OCCUPATION: MILL WORKER
1996, Colour, 22 mins
Textile mills were once the backbone of Bombay’s economy and provided the city its working class culture. Today, foreign investment and rising real-estate prices have made selling mill lands more profitable than running mills. Mill ‘sickness’ is now an epidemic.
Images you didn’t see
2006, Colour, 5 mins
Global censorship of the war on Iraq has stifled the outrage that may have otherwise curtailed the ongoing atrocity of occupation. Not only have the real causes of war been hidden but also its effects. Most people see a sanitized and falsified version that feeds their complacence and sedates their conscience.
But one place where the truth cannot be totally hidden is the Internet. “images you didn’t see” is a music video that interprets images gleaned from the net – images that either never appear in the mainstream media, or images whose import are masked behind a velvet curtain of global infotainment.
Children of Mandala
2009, 5 mins
A message from the economically displaced children of a slum colony in Mumbai who are educating themselves in the face of government apathy.
No product review yet. Be the first to review this product.