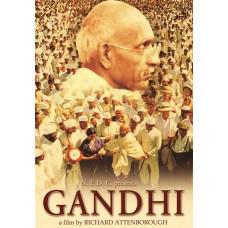 Weight
150.00 gms
Price: ₹ 299.00
1
Add to cart
Buy Now
Sorry! No Stock Available
Add to Wishlist
Questions?
Email a friend
The film spans 56 out of Gandhi's 79 years. It starts with his days in South Africa, where Gandhi is seen as a young attorney, who is thrown out of a first class compartment in spite of having a valid ticket. Angered at this humiliation, Gandhi decides to protest for the rights of Indians and other coloured people. It is here that he meets with his first success. His fame spreads to India and he is invited to return home to take part in the freedom struggle. On arrival, he is shocked at the poverty in the country and undertakes to travel all over the country to witness, at first hand, the atrocities of the British Empire. Gandhi's struggle to win freedom for India through his non-violent approach, his belief that men are more good than evil and his spiritual ideas all form a part of this saga, the biography of a fascinating world leader - both spiritual and political.

No product review yet. Be the first to review this product.