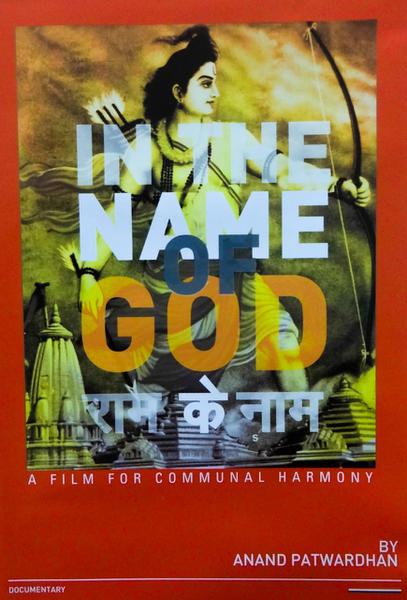 Weight
130.00 gms
Price: ₹ 499.00
1
Add to cart
Buy Now
Sorry! No Stock Available
Add to Wishlist
Questions?
Email a friend
A Film  By Anand Patwardhan
Ram Ke Naam (1992, 75 minutes)
Trailer : http://vimeo.com/99052145
Since gaining independence in 1947, India has been a secular state. But now, as religious fundamentalism grips much of India’s population, the greatest danger to the nation’s extremely strained social fabric may come not from Sikh or Muslim separatists, but from Hindu fundamentalists who are appealing to the 83% Hindu majority to redefine India as a Hindu nation.
IN THE NAME OF GOD focuses on the campaign waged by the militant Vishwa Hindu Parishad (VHP) to destroy a 16th century mosque in Ayodhya said to have been built by Babar, the first Mughal Emperor of India. The VHP claim the mosque was built at the birthsite of the Hindu god Ram after Babar razed an existing Ram temple. They are determined to build a new temple to Ram on the same site. This controversial issue which successive governments have refused to resolve has led to religious riots which have cost thousands their lives, culminating in the mosque’s destruction by the Hindus in December of 1992.
The resulting religious violence immediately spread throughout India, Pakistan and Bangladesh leaving over 5,000 dead and thousands homeless. The repercussions reverberate to this day in the sub-continent.
Filmed prior to the mosque’s demolition, IN THE NAME OF GOD examines the motivations which would ultimately lead to the drastic actions of the Hindu militants, as well as the efforts of secular Indians of all creeds to combat the religious intolerance and hatred that seized India in the name of God.
No product review yet. Be the first to review this product.