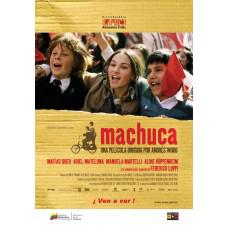 Weight
90.00 gms
Price: ₹ 349.00
1
Add to cart
Buy Now
Sorry! No Stock Available
Add to Wishlist
Questions?
Email a friend
Subtitles: English / hindi
Machuca is a 2004 Chilean film written and directed by Andrés Wood. Set in 1973 Santiago during Salvador Allende's socialist\r\ngovernment and shortly after General Augusto Pinochet's military coup in 1973, the film tells the story of two friends, one of them\r\nthe very poor Pedro Machuca who is integrated into the elite school of his\r\nfriend Gonzalo Infante. The social integration project is headed by the\r\ndirector of the school, Father McEnroe.
The film is from the perspective of Gonzalo Infante, a\r\nprivileged Chilean boy, during a time period in which the lower classes are\r\npolitically mobilized, demanding more rights and forcing fundamental change. At\r\nthe same time the upper middle class, including Gonzalo's own family, grow\r\nfearful of the growing socialist movement and plot against the country's\r\nelected president, Salvador Allende. Gonzalo's father, while sympathetic to the\r\npoor and not part of the right-wing movement, wants to leave the country to\r\nItaly, where he frequently travels for work, to avoid the Socialist policies.\r\nSra. Infante is having an affair with a wealthy older gentleman, who gives\r\nGonzalo gifts to keep him quiet. Gonzalo is sometimes bullied by his sister's\r\nboyfriend, who is a violent anti-Allende right-winger who uses nun-chucks to\r\nintimidate people. The family often buys products off of the black market, due\r\nto rationing and shortages.
No product review yet. Be the first to review this product.