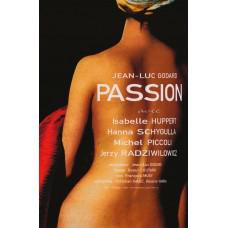 Weight
90.00 gms
Price: ₹ 349.00
1
Add to cart
Buy Now
Sorry! No Stock Available
Add to Wishlist
Questions?
Email a friend
Subtitles: English / hindi
Passion is a 1982 film\r\nby Jean-Luc Godard, and the second\r\nfeature film made during his return to relatively mainstream filmmaking in the\r\n1980s, sometimes referred to as the Second Wave. Like most of Godard's work\r\nfrom this period, Passion is shot in color with a 1.37 aspect ratio. Cinematographer\r\nRaoul Coutard, collaborating with Godard for the first time since 1967, won the\r\nTechnical Grand Prize for cinematography at the 1982 Cannes Film Festival.
\r\n\r\n
Jerzy is a Polish\r\nfilmmaker working at a big studio in Switzerland shooting a series of tableaux vivants for a\r\nfeature film. His producer Lászlo is impatient because there is no apparent\r\nstory to this film and Jerzy keeps canceling the shoot, repeatedly citing\r\ndifficulties with the lighting. In the process of making his film, Jerzy has\r\ngotten involved with two local women: Isabelle, an earnest young factory worker\r\nwith a stutter, and Hanna, the worldly German owner of the hotel where the crew\r\nis staying. Hanna is married to Michel, an arrogant man with a chronic cough\r\nwho owns the factory where Isabelle works.
No product review yet. Be the first to review this product.