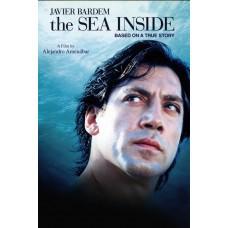 Weight
90.00 gms
Price: ₹ 349.00
1
Add to cart
Buy Now
Sorry! No Stock Available
Add to Wishlist
Questions?
Email a friend
Subtitles: English / hindi
The Sea Inside (Spanish: Mar\r\nadentro) is a 2004 Spanish drama film written, produced, directed and\r\nscored by Alejandro Amenábar, which won the Academy Award for\r\nBest Foreign Language Film. It is\r\nbased on the real-life story of Ramón Sampedro (played by Javier Bardem), who was left quadriplegic after a\r\ndiving accident, and his 28-year campaign in support of euthanasia and the right to end his life.
This is the life story of Spaniard Ramón\r\nSampedro, who fought a 28-year campaign to win the right to end his own life\r\nwith dignity. The film explores Ramón's relationships with two women: Julia, a\r\nlawyer suffering fromCadasil syndrome, who supports\r\nhis cause, and Rosa, a local woman who wants to convince him that life is worth\r\nliving. Through the gift of his love, these two women are inspired to\r\naccomplish things they never previously thought possible.
No product review yet. Be the first to review this product.